For the Strawbale Junkies ...

Since there seems to be quite a bit of interest our Straw Bale House I'll post a tad more info on it. Firstly, here are the plans. 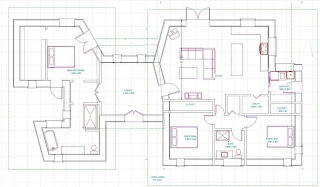 Here's the 3D diagram of it. 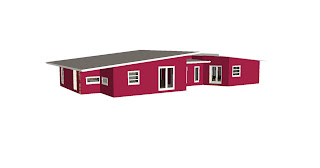 We're building the house in two stages. The first is perilously close to being finished. Only another two or three years to go. That is if we ever finish it.

Daffodil and I spent a lot of time working out what sort of house to build. We looked at all of the alternative building materials and finally decided that Strawbale were for us. For an owner builder, it's pretty forgiving. You can fix a lot of stuff ups with yet another coat of render. So far this summer we've really enjoyed the insulative qualities of strawbales. It's going to be 40 degrees tomorrow and the house will remain quite cool. We just have a ceiling fan to move a bit of air around and it's more than comfy.

I read 4 books and a saw few DVDs about Straw Bale House building before I worked out which of the brazillian methods we would use. I eventually decided that this bloke Brian Hodge from Heathcote in Victoria made the most sense, so I chose his building method. Checkout his website for more info.

There are so many decisions to be made when building a house and doubly so when you are building your own. The first major one we did after deciding to do strawbale was to put the house on stumps instead of a concrete slab. Our reasoning was three fold, firstly slabs are really expensive, $25k+. The floor frame cost us about $5k. Secondly, the embedded energy in concrete and the associated C02 emissions are just obscene. Thirdly, concrete is such a crappy surface to live on. It's bad for your feet and back.

Here is a picture of the stumps as we put them in. 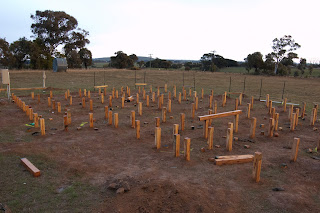 Let me warn you that while stumps are cheaper than concrete if you do it yourself, you will get yourself a great set of abs from doing stumps. There are 120 stumps, that need holes dug, cleaned out, concrete chucked in, stumps lined up, filled back in and the soil compressed with a crowbar. I had abs of steel for at least three weeks after that was finished. Lucky for you I don't have any pictures of that.

Here's the floor frame finished or at least almost finished. Nothing is ever quite finished. 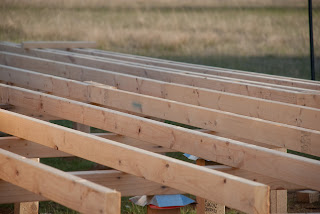 I'll find a few more pictures and post them along with some more of trials and tribulations of owner buildering soonish.

Daffodil
I am looking to reduce my carbon footprint without withdrawing from society completely. I would love to live a self sufficient life, but with owning and riding horses and still paying taxes to afford my hobbies, I will settle for what I can grow, make, create, barter, reuse, recycle and repurpose.